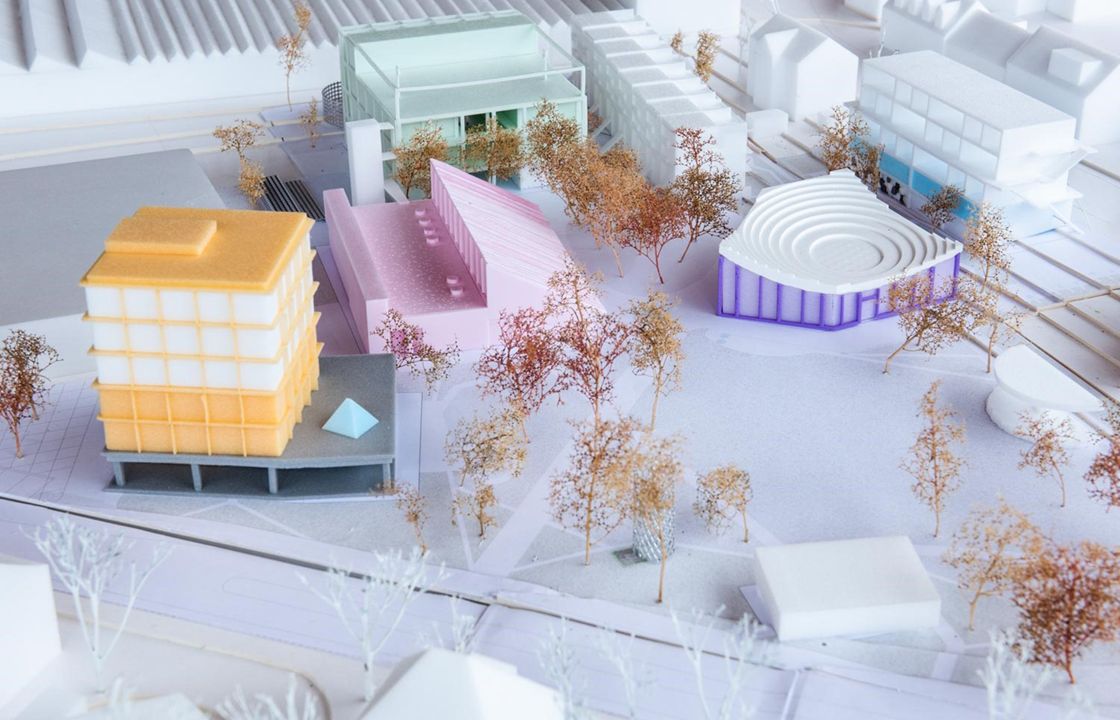 1,600 suggestions and ideas give rise to a “vibrant new quarter”

Since the fall of 2020, the Schöpflin Foundation has been working with four renowned architectural firms on the urban development concept for the 14,200 m2 (3.5-acre) FABRIC site in Lörrach-Brombach.  The plan and design will now be presented to the public; and this will reveal how the public wish-list – which came out of what we called the ‘what would YOU like to see happen?’ planning process – has been incorporated into the design.   Back in April 2018, neighbors, Lörrach residents, Foundation employees and guests were given six months to submit ideas and a wish-list for the new site.  During this intensive participatory planning process, which was led by a team supporting the Hamburg conceptual artist Christoph Schäfer, over 1,600 suggestions and ideas were collected – in other words, a giant, public wish-list.  These have all played a central role in the subsequent design process.

At the heart of the new quarter will be various open spaces in which the results of the "wish-list” process will be reflected in a variety of ways.  Around the central square – known as the Agora – there will be a canteen and the "Werkhaus", the latter offering public workshop space and workshop rooms.  The site will also incorporate apartments for different forms of cohabitation.  These will complement the existing housing stock in Brombach and will be future-oriented and reflect local demand.  A total of up to seven buildings are to be constructed in several phases.  On the first floor of each of the buildings there will be public or commercial areas and space.  The public demand for low-cost food will be met by the canteen and a café, where the focus will be more about meeting people than simply consuming.  All the buildings will be in a park setting, which was one of the key requests of our neighbors.  Water also features in several parts of the design – again reflecting requests made during the public consultation.  In addition, this will be a low-traffic quarter, further enhancing the quality of living here.  The plan also includes a building plot which could house an expansion of the Schöpflin School.  The elementary school – located on the site opposite – will open its doors in September 2021.  It has not yet been decided if there is to be a secondary school.

The Foundation also sort and relied on the "knowledge of the many" when it came to the urban planning process, carried out with our architects.  Instead of going down the standard route of launching a planning and design competition, we entered into a dialogue with multiple experts in order to develop an urban planning solution for what is a complex project.  The plan and design for the site were drafted jointly by a large team over a six-month period.  The team included four international architectural firms: BeL Sozietät für Architektur from Cologne; ifau Institut für angewandte Urbanistik from Berlin; Clauss Merz from Basel; and NL Architects from Amsterdam.  Then there were two Basel-based landscape architectural bureaus, namely META and Studio Céline Baumann.  We also worked with the Hamburg-based mobility experts ARGUS; and the Stuttgart-based energy and climate experts Transsolar.  These various companies were free to decide how they would work together – but for all of them, this form of collaborative planning process was a new and rather special experience.

The project was supported by the Basel-based project development company, denkstatt sàrl.  Back in November 2019 they carried out a feasibility study looking at how to use the ‘public wish-list’ concept in an urban planning project.  The company also co-conceived, organized and guided the workshop process.  A project advisory board – chaired by Prof. Dr. Christiane Thalgott, former head of planning for the city of Munich – was also appointed and actively involved in the process.  Also on the board were Markus Müller, President of the Baden-Württemberg Chamber of Architects, and Andreas Ruby, Director of the Swiss Architecture Museum in Basel.  Other advisory board members included representatives of the Schöpflin Foundation; the Lörrach city mayor, Monika Neuhöfer-Avdic; and the mayor of the district of Brombach, Silke Herzog.

The top priority for the Schöpflin Foundation throughout this process has been to take seriously the wishes expressed by people during the public consultation.  Because, as our founder, Hans Schöpflin, has said, “Our aim here is not to build a monument to the Foundation – but rather to build a functioning and lively neighborhood for Brombach and the expanding northern district of Lörrach.”

From June 11, 2021, anyone interested in learning about what will be built on the FABRIC site in Franz-Ehret-Strasse is very welcome to come along and take a guided tour (offered daily between 10 a.m. and 6 p.m.).  The tours will be in the open air and covid compliant.