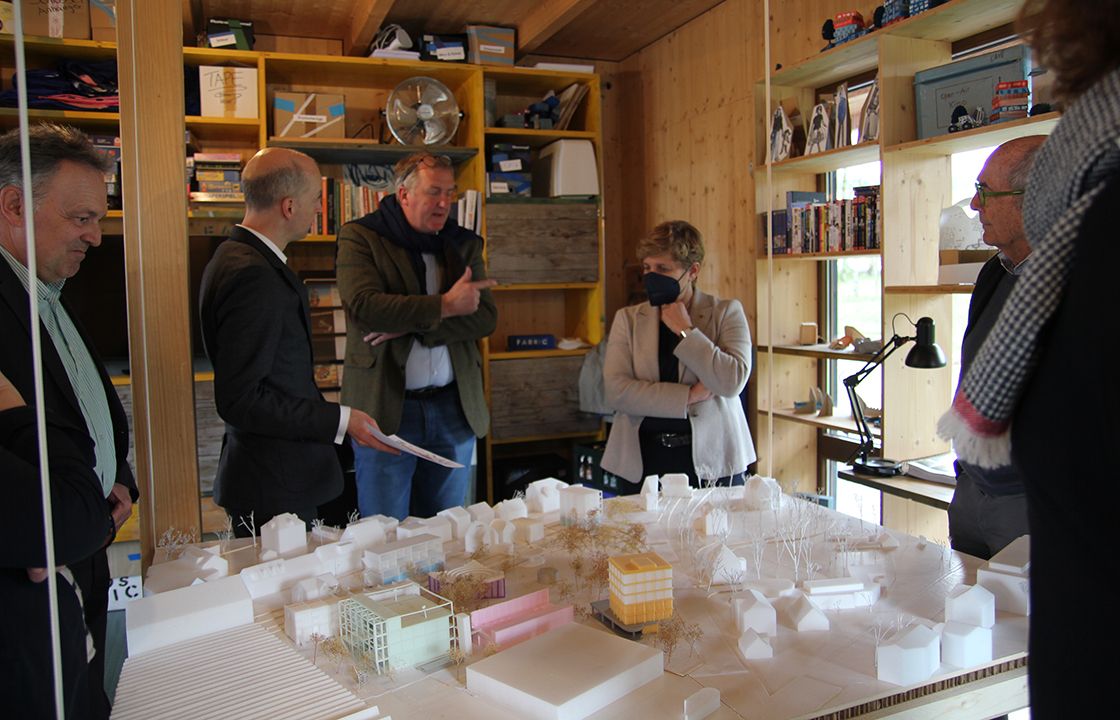 On Friday, April 8, the Minister for Regional Development and Housing of the State of Baden-Württemberg, Nicole Razavi, was in Lörrach.  She visited two urban development projects in Lörrach-Brombach, including the Schöpflin Foundation’s FABRIC project.  She was joined on her visit by the board and employees of the Schöpflin Foundation; the president of the Baden-Württemberg Chamber of Architects, Markus Müller; and by Joscha Frey and Sabine Hartmann-Müller, members of the regional parliament of the state of Baden-Württemberg.

In order to develop a new neighborhood on the "FABRIC" site we, as a foundation, were guided by one key question: how might community spaces look in the future?  Across 15,000 square meters of undeveloped land in the heart of our hometown of Lörrach-Brombach, we designed an artistic participatory planning process and asked people for their views about want they wanted on the site.  Based on these ideas, a neighborhood is now being created that focuses on new forms of community that combine living, commerce, people coming together and sustainability.

The minister described the project as "incredibly exciting," on the one hand calling the participatory process "highly innovative" while also praising the aspects of affordable housing and the mix of different uses planned for the site.  "Many future issues are being addressed here that are important both politically and socially," she said, referring to the combination in the plan of living, working and leisure pursuits.  She said it was important that community and communal infrastructure were created, taking into account the different needs of the local community.  Markus Müller, who is leading for the project on the Foundation’s advisory board, pointed out that issues such as competing interests and conflicts, which often delay planning procedures, had been resolved at an early stage through the participatory planning process being used in the project.

A "neighborhood of the future" is being created here, the minister explained, stressing that in the future, social cohesion must be taken into account in all building projects.  This, she said, is what the Foundation is creating with this new neighborhood.  Hans Schöpflin, in turn, expressed the wish that the project would also have an effect beyond the region – a ripple effect, like a stone thrown across a lake.  "That's how I see our mission," he said.

You can find more information about FABRIC here on our website.